Mithra produces without interruption thanks to UPS and emergency power

Mithra is a Belgian pharmaceutical company specialising in women’s health products. Luminus Solutions installed a ride-through flywheel system there in early 2022. This allows the production lines to continue running uninterrupted in the event of a power cut or voltage dips. In parallel, the entire emergency power supply of the site was prepared for Mithra’s ambitious future plans. The project is a fine illustration of the synergy within the Luminus Group.

At its site in Flémalle, Mithra currently operates three production units with an R&D zone, and is considering the possibility of further expansion of the plant over time.  It was the right moment to take a close look at its emergency power facilities. To do so, Mithra called in an engineering agency that recommended de-duplicating the existing 1600 kVA diesel generator. When Mithra subsequently approached Luminus’ subsidiary Newelec to carry out the works, Luminus Solutions in consultation with Newelec made a counter-proposal. This retained the current emergency power group in combination with a flywheel system. In this way, Mithra has a fully-fledged no-break solution for a significantly lower investment, with room already provided for further expansion.

Seamless production thanks to ride-through flywheel 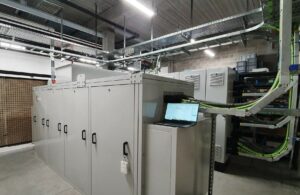 Luminus Solutions’ proposal was to install a 1,000 kVA ride-through flywheel developed by IEM Power Systems. This by itself can bridge small power outages of up to 15 seconds or so, depending on the load at the time. That is enough time for the emergency generator to take over the power supply. In this configuration, the diesel group and flywheel form separate installations. This allows the flywheel to cope with minor interruptions even if the generator is unavailable, e.g. during maintenance. Thanks to the new system, production processes continue to run uninterrupted at all times and no batches are lost due to irregularities in mains power.

The project is a fine example of the close cooperation between the various Luminus Group subsidiaries. The project took less than a year from enquiry to completion and was part of a larger electrical project already in progress by Newelec. Luminus Solutions supplied and installed the installation on behalf of Newelec and regulated the start-up parameters of the existing diesel group in collaboration with manufacturer Rolls-Royce Solutions. This allows the diesel group to start up before the energy of the flywheel is used up. We also provided acoustic insulation that dampens noise to 72 dB(A) measured from one metre away. Newelec itself took care of the modifications to the low-voltage panels and the connections for the flywheel system. Sufficient physical space was also kept free to integrate a second (redundant) Ride through system in the future. In the control system, the necessary equipment has already been provided for this purpose.